A Moroccan bellydancer helped to capture the imaginations of residents in Yorkshire after putting on an exotic show which featured an array of music, food and folk dances in celebration of Middle-Eastern culture.

The Cabaret Arabia show was organised by Nawarra, a bellydancer who is known across the world for her talents and ability to inspire and teach others about the origins of Arabic dancing.

But this is no ordinary bellydancing event. Held in Headingley, it featured dancers from all over the UK, who showcased a variety of different styles which included everything from Egyptian to dark-fusion dancing.

Tracey Gibbs, is a dancer and agent who performed at the event. She has previously worked as a stage manager, dancer and photographer for shows across the world, including in mainland Europe and Egypt.

She also organised the first Racks Britannia festival, Manchester, which coincided with the World Cup in 2005.

Ms Gibbs said she got into bellydancing after seeing a dance show featuring talented Egyptian dancers.

She said: “I’ve been dancing since 1988. My style is predominantly Egyptian, and modern, but I do other styles as well, like Khaleegy dance from the Gulf State, as well as Iraqi and Tunisian dances. When I first started learning, I fell in love and it became a huge part of my life, to the point now where I am an agent for dancers. I teach dance and I put on shows all over the UK. I’ve also been involved in festivals in Cairo and helped to run them.”

Another well-known dance teacher who performed on the evening was a lady called Beverley Smith, who has been a bellydancer for over 20 years.

She has currently got her own dance troupe called Egyptia and will be participating in the upcoming Funoon Al Jazeera show which is set to take the UK by storm in just a few months.

Her main focus however, is on educating the audience about the wide-variety of styles which exist within bellydancing.

She said: “It is the first of its kind that we know of in England. It is showcasing all of the dance styles that never get a look in. It exhibits very obscure dance styles that nobody has ever thought about. It takes those dances and puts them into the public eye it looks amazing. Without these styles there would be no modern-style bellydance because that is where bellydance comes from.”

Other notable guests who performed on the night included Cis Heaviside, a dancer from Sheffield, and Beverely Spracklen who invented her own style of bellydancing – dark fusion. Dark Fusion takes its main inspiration from the Gothic movement, although it also incorporates the dark elements of other music traditions such as dubstep. 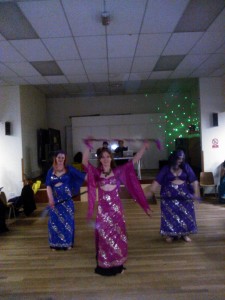 The event was held as a fundraiser to an upcoming dance tour, which will see Nawarra, along with other teachers and dancers put on performances in major cities across the UK.

Nawarra said that the aim of the show was not just to highlight the origins of bellydancing, but also to unite cultures.

Her next Cabaret Arabia show will help to cultivate a deeper understanding and love of Oriental music and dance.

But her main project will be an event called the  Funoon Alhouriya – The Art of peace, which will retain a special focus on styles from countries where violence or unrest has broken out.
Nawarra said that despite media reports which often exaggerate the tensions between Jews and Arabs living in countries such as Palestine, her events help to show common ground between different groups of people.

She said: “The whole idea for me as an Arab living in the UK is bringing dances like this to mix the two communities. That is the whole idea to learn with each other and perform together.

This time we are going to feature countries that had political and religious conflicts like Iran, Iraq and Palestine.

“Our message is to raise awareness that those people at one time lived together and danced together. Another thing is from personal experience as an Arab dancer, I just came back from Palestine and was very well-received and warmly welcomed. People would give me hugs, and invite you to come to their homes. I’m talking about the Moroccan Jews there.

“It is totally different to what you hear on the news. I hope it will be a big success, like it was last year. It is about uniting cultures. A few years ago you never used to hear extremist views and we’re trying to highlight that in one theatre and on one stage.”

The Funoon Alhouriya event will be on June 8th at the Mac Birmimgham Foyle Studio, and in Liverpool at the Liverpool Arabic Arts Festival on June 14th. On November 16th, the show will come to Leeds and take place at The Venue, in the Leeds College of Music.
The Cabaret Arabia Show on the other hand, is set to take place on June 29th.

Our regular newsletter contains lots of marketing tips, and ideas plus special offers